From 9th to 12th March 2017, the Embassy of the Czech Republic will offer Malaysians the opportunity to enjoy some of the best Czech films with the first Czech Film Festival in Malaysia.

The Ambassador of the Czech Republic, H.E. Rudolf Hykl said the festival is meant to enhance the Czech-Malaysia cultural understanding and increase the appreciation of Czech movies in Malaysia.

The Oscar-winning movie Kolya, tells the story of Louka, a womanizer, cellist and bachelor who wishes to live a life free from responsibilities and refuses to accept that old age is empty of love. When his friend introduces a plan to gain money by signing a contract marriage with a Soviet’s niece, he reluctantly agrees. After the marriage, the wife left him with her 5-year-old son Kolya, for a rendezvous with her boyfriend abroad.

Kolya is a heartwarming movie with some interesting aspects of humor, classical art of music and blossoming relationships between the characters. However, the movie only gets intriguing from the second half of the movie when Kolya is forced to be under Louka’s care.

As the story progresses with Louka and Kolya’s intimate bond with each other, a series of unfortunate events and realistic sacrifices made by Louka for Kolya indicates the change of heart towards his management of his life and decisions.

Therefore, the audience may generate feelings of sympathy towards Louka as a “single father”. Not to forget, Kolya’s adorable presence lightens the whole movie with his cheeky personality as he disturbs Louka’s pursuit for women. The story concludes with a beautiful message which aids any point in anyone’s life; to take new chances and opportunities that can significantly change one’s future.

The common themes of the films revolve around from Czech’s medieval history to captivating stories of recent times. H.E. Rudolf Hykl said that audiences can expect these things from viewing the movies: “a witty sense of humour, realistic portrayals of life situations and the absurdity of human behaviour.”

There will be a total of 30 complimentary screenings. Visit GSC Cinemas to secure tickets from March 2nd onwards while tickets last. Lastly, the Embassy invites the international public to take this privilege of the professional cinematographic showcase from the Czech Republic. 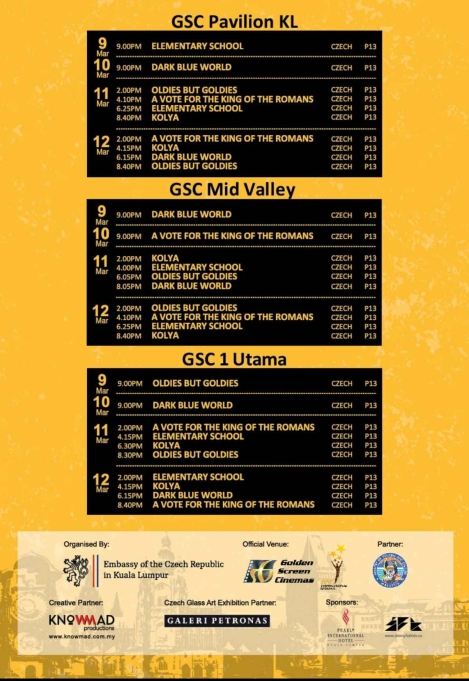