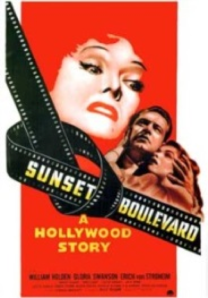 It is the mid-40s in Hollywood and a body floats in the swimming pool of a long forgotten film star. Flashbulbs are twinkling furiously away and a shot of the deceased’s face is shown. The blank look, as well as the clear waters, suggests something dark and sinister- after all, no death in Hollywood is ever that simple and straightforward. Such is the way Sunset Boulevard (1950) beckons its audience to observe a game of cat and mouse, playing out between its two main characters, Norma Desmond and Joe Gillis.

The film has William Holden as Joe Gillis, an unsuccessful screenwriter, who, in his own words, claims that whilst he has talent, “that was last year, this year; [he is] trying to make a living.” He agrees to become a script doctor for Norma Desmond, acted by Gloria Swanson- a forgotten silent movie actress who is obsessed about her fame and youth. The film goes on to show how Gillis eventually becomes Norma’s lover despite being in love with another woman, and the plot thickens when Norma discovers his love affair.

Billy Wilder, the director of Sunset Boulevard, is said to have been inspired for this film by his ambles around Hollywood circa 1940s, where he would see such grand mansions looming ahead on hills and peaks, with nary a sound about nor a soul in sight. He often wondered what had become of the occupants of those houses, and if the occupants themselves were looking back at Wilder, through their tinted windows and creaky balconies.

This feeling of being watched by the forgotten is explored extensively throughout the film, and it is further strengthened by Norma’s constant scrutiny of Joe’s every movement. To both the audience and to Joe, it is irritating and it comes as no surprise that Joe is often lashing out at Norma, and making her squirm becomes his favourite hobby.

The themes of possessiveness and fragility are subtly captured in the main characters’ every gesture and gaze. And despite it all, one does tend to ask, why? Why does Joe not leave when he could have, oh so many times? In fact, why did they all not leave? One answer would be that when you are caught in a different time and in a different world of which you have no control whatsoever, you can only live, eat, breathe and die as your director would want you to. And for the characters of Sunset Boulevard, Norma Desmond, silent movie star extraordinaire, is that director. Nothing escapes her-nothing but reality, that is, for it is she who says “I am big; it is the pictures that got small!” 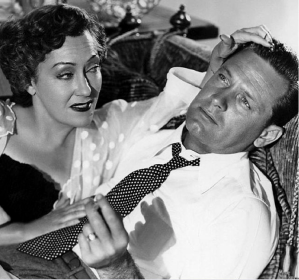 The black and white imageries as well as the film noir style that Sunset Boulevard is shot in showcases the difference between what is real and what is fiction. Norma’s own state of mind, resembling a whirlpool of greys and emptiness, contrasts with those black and white shots. The heavily made up face of Norma, what with her white cast visage and her pencilled-in brows, seems to hint at how she looks at herself- as a celebrated artist of the Roaring 20s. Her fur throws and fox stoles as well as her 1929 Rolls Royce all indicate her mind’s inability to grasp the passing of times. Indeed, at the end of it, one is wont to ask, is she unable to keep up with the times, or does she choose not to do so?

Sunset Boulevard won 3 Academy Awards at the 1950 Oscars, and has been included into the National Film Registry for preservation as it is deemed culturally, historically and aesthetically significant.

Watch this film not only for its famed technicalities but for its overall message- the action of forgetting someone is somewhat normal; being forgotten on the other hand is a different notion altogether. And for some, being forgotten is never an option.

“I am ready for my close-up, Mr. DeMille,” Norma says as she ascends down the stairs in that iconic scene. How very apt those words are for a lady who is in essence Hollywood itself; grand and self-absorbed, with a touch of madness framing the edges.