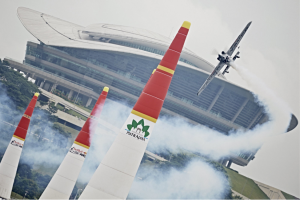 The Red Bull Air Race, established in 2003 and organized by Red Bull, is an international series of air races in which competitors have to navigate their planes through a challenging obstacle course in the fastest time to be crowned a champion. The pilots fly individually against the clock and have to complete tight turns through a course consisting of “Air Gates”. The Air Race was cancelled for 2011, 2012 and 2013 worldwide, but the series resumed in 2014.

The races are held mainly over water, near cities. Races are usually held on weekends, with the first day for qualification, then knockout finals the day after. The events attract large crowds, as expected of any Red Bull event, and are broadcasted, both live and taped. You can catch the action live at http://www.redbullairrace.com/live for this year’s event.

However, for those wanting to take a closer look, you will find that the usually quiet city of Putrajaya has been transformed to a hub for daredevils to show off their skills with their planes today, 17th May, at the qualifying round for the Red Bull Air Race. It’s the first time in South East Asia that this global championship is taking place, and this is the third stop of their championship, which will go on till November.

Austria’s Hannes Arch posted the fastest time in the first training session on Friday in Putrajaya, ahead of the qualifying round today, and Australia’s Matt Hall came in second with a difference of a fraction of seconds, with Britain’s Paul Bonhomme coming in third.

The heat in Putra Jaya managed to become a challenge for the pilots but they pushed through temperatures of 45 degrees in their cockpits in order to showcase their talents.

“I was trying to fly as close to the limits as possible and might have deserved a penalty but luckily didn’t get it,” says Hannes Arch. He also admits, “The good news is that I know I can fly fast here. Now it’s important to deliver it the right way without flying too aggressively or going over the limits. This was a good training result.” Meanwhile, Bonhomme, who lost to Arch by a fraction of a second in Croatia, has said he has lost 2 kilos since that race and he believes it’s going to give him the edge to win the race on Sunday.

Be there on Sunday to catch all this action and more at Putra Jaya if you have already bought your tickets. If not, there is always the option of watching it live on their website. This is not an event to be missed if you love daredevils and stunts. There’s beer, food, Red Bull and the pilots pushing their limits to come out on top for the first time in South East Asia- what better way to spend your Sunday?